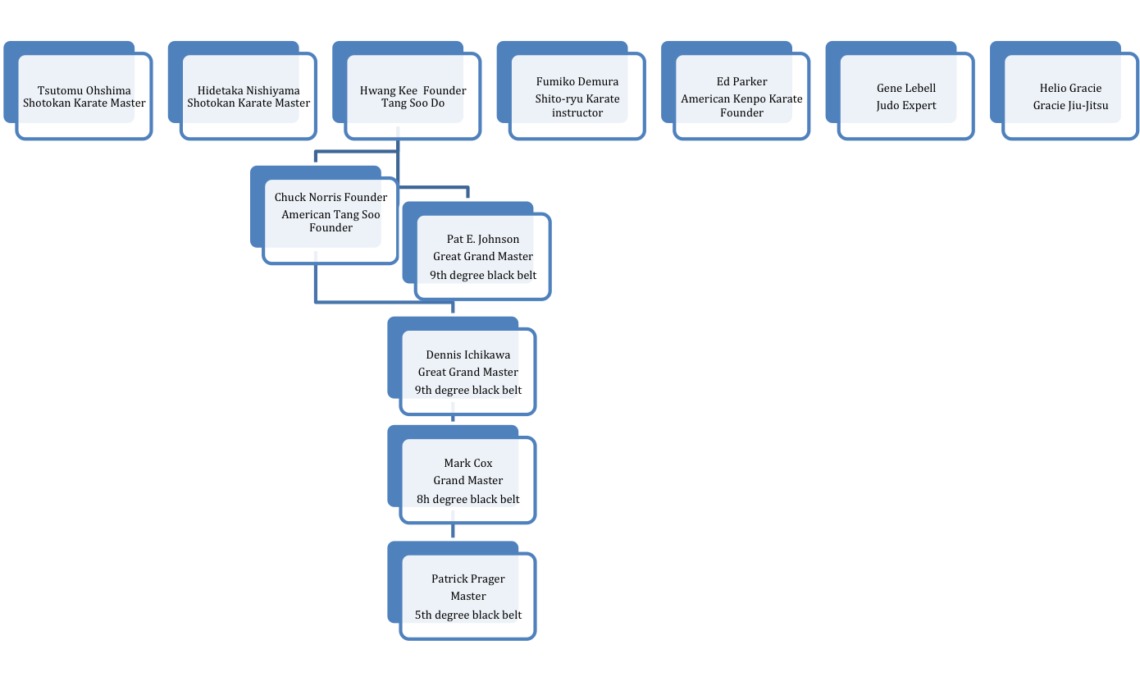 Chuck Norris, a former karate champion and member of multiple martial arts halls of fame, learned Tang Soo Do under Master Hwang Kee while living in Korea.  When he returned to the U.S. he continued his training in a variety of martial arts, and incorporated techniques from the masters who taught him into American Tang Soo Do.

9th degree black belt Pat E. Johnson, who was chief instructor at Chuck Norris’s studio, has had an illustrious martial arts career.   He is known not only for being a National Tang Soo Do Champion but for his excellent instruction.  In fact, in 1995 Black Belt Magazine named him Instructor of the Year.  And his outstanding martial arts choreography work can be seen in movies such as the Karate Kid series, Teenage Mutant Ninja Turtles, and Mortal Kombat.

Mr. Johnson, along with Mr. Norris, taught Great Grand Master Dennis Ichikawa who is the founder of American Tang Soo Do in the San Fernando Valley and in Ventura County, and President of the American Tang Soo Do Alliance.  He has taught for more than 30 years and among his pupils is Grand Master Mark Cox, who owns Chatsworth Karate and is the main instructor of Master Patrick Prager.

8th degree black belt Mark Cox has continued the tradition of excellent instruction and well honed martial arts skills.   He has instructed hundreds of students and operates one of the largest schools in the San Fernando Valley with more than 400 students having attained black belt status.
5th degree black belt Patrick Prager invites you to become part of the tradition and begin your training today at The Edge Martial Arts.